In nature, a propolis envelope can provide critical health defenses for the honey bee colony. As such, various methods of inducing propolis have been previously investigated. This study set out to compare three wall treatment methods to induce propolis deposition.  We found that using propolis traps and roughening the wall with a wire brush promoted the propolis envelope over a four-week study period.  Screen material was less effective at inducing this behavior.  Beekeepers should consider roughening the inner walls of their managed hives to promote hive health.

A behavioral defense in the hive is the collection of propolis. Naturally, such as inside a tree, the bees collect and distribute propolis, called a propolis envelope (Graham, 2015). It is believed that the most important effect is on the immune system. It has been shown to increase both colony strength and vitellogenin.  A natural propolis envelope is an important antimicrobial layer surrounding the colony, which benefits the health of the colony and is referred to as social immunity, contrasted to the individual immunity of the bee. There have been several studies that document the benefit of a propolis envelope to bee health and immune system function. In honey bees, social immunity plays an important role in reducing parasite establishment and spread within colonies (Arathi et al., 2000; Evans and Spivak, 2010; Simone-Finstrom and Spivak, 2010).

It is believed that honey bees do not construct a natural propolis envelope in man-made beekeeping equipment because the inner walls are smooth. The bees deposit propolis in cracks and crevices, but this is not a continuous envelope (Simone-Finstrom and Spivak, 2010). While propolis traps have been used to cause the bees to deposit a propolis envelope in man-made hives (Simone et al., 2009), the cost is prohibitive in apiaries with multiple hives. The cost per box for such an approach would be approximately $25, multiplied by the number of deep boxes used per colony. In this pilot study, we compared three methods of inducing bees to propolize the inner walls of Langstroth beehives over a one-month period during the late summer in the United States.

We used three methods to induce propolis deposition: 1) affixing a portion of a commercially available plastic propolis trap (PT) to an inner hive wall, 2) affixing #8 Hardware Cloth as a screen wall (SW) and 3) roughening an inner wall via the use of a powered drill mounted wire brush (RW).  In each test hive, one inner wall was left blank (as our control, C) and the other three inner walls were randomly treated with the PT, SW and RW.  Wall randomization at the hive level was performed by pulling labeled slips of paper from a hat. A predetermined treatment assignment was used for each sequential wall drawn: C, PT, SW, RW.

For standardization in evaluating propolis deposition, the treatment area was based on the inside front wall width of a 10 frame Langstroth Hive.  This treatment area was then centered as on the longer side walls of the box.  Both deep and medium brood boxes were used, according to the hive type in the apiary, with adjustment of study area made for the smaller medium boxes.

The PT and SW were affixed to the inner wall using thumbtacks, lath screws or heavy-duty staples at each corner with more fasteners affixed in the center of the treatment area or the center of edges as needed to assure the treatment laid flat on the surface. For the drill mounted roughening, the treatment area was divided into four quadrants and the drill mounted wire brush was run in each quadrant for 15 seconds using moderate to heavy pressure for a total of one minute of roughening.

Four hives were selected randomly – a slip drawn from a hat – for study participation across three apiaries, two located in the Colorado Front Range and one in a suburb of Seattle, resulting in twelve study hives.  The test hives were all brood boxes consisting of two deep hive bodies or three medium hive bodies with the top body containing brood as the study unit.  Some, but not all hive stacks had honey supers above a queen excluder.  During the four-week study period, hive maintenance occurred as required and thus varied across apiaries (e.g., mite treatments, honey collection).

Based on the work of Hodges et al. (2018), we used an ordinal measure to determine the degree of propolis deposition.  The degree of wall coverage with propolis was characterized using a five-point scale: 1 = no propolis, 2 = minimal deposition, 3 = moderate deposition, 4 = significant deposition and 5 = heavy deposition.    Each wall was scored by the apiary beekeeper and the mean score by wall treatment across the twelve hives was compared to the control wall using a paired T test. Tests between wall treatments were also performed.

The 12 hives were modified, four in each apiary, with assigned wall treatments in July, 2019.  Four weeks later the treatment hive boxes were collected, and the inner walls were compared for propolis deposition (figures 1-3).  The assigned mean propolis scores for PT, SW, RW and C were 3.3, 2.1, 2.6 and 1.3, respectively (figure 4). Paired T tests were highly significant for all three treatments compared to the control walls (p < .05); the PT treatment was significantly better than the SW (p < .05) and almost significantly better than the RW (p=0.055).

There were many learnings from this pilot regarding our study protocol.  We were looking for wall treatments that could be applied in the field, rather than requiring to be prepared ahead of time, as this field implementation would save on the number of hive boxes required on hand.  Beekeepers may not own enough hive boxes to prepare, transport and replace the existing hives in the apiary.  We therefore applied the wall treatments on site, which took time and introduced variation to the study.  Affixing the PT and SW treatment needed to be done with attention to keeping the material flat against the wood wall; a number of treatments were not properly fastened down across the surface, allowing bees to crawl under and become trapped, potentially discouraging propolis deposition in the wide space, and possibly interfering with the bee space in the hive.  Roughening the wood surface with a wire brush was standardized across the apiaries by type of brush used and time period of roughening, however the final surface roughening likely varied across hives due to ability of beekeepers (e.g., arm strength, age, disability).

The degree of inner wall propolis covering that confers health benefits to bees is unknown, which makes it difficult to define what constitutes a successfully propolized wall for this study.  It may be that some propolization is better than none and as such anything that increases propolis above the level seen on the smooth control surface is of benefit.  It is also unclear whether the propolis envelope is best surrounding the brood nest or is valuable surrounding the honey stores typically above a brood nest.  Some of our hives were structured with the brood nest in the bottom deep and honey stores in the top deep (separated by a queen excluder), whereas other hives allowed the brood nest expansion up and down the boxes.  Previous studies have been performed in nucs and have not involved treatments for one or more both boxes in a two-deep hive.  The extent of treatment could significantly impact the cost of the intervention for a beekeeper, depending on the number of boxes treated.

There are a number of strengths to our proposed study method.  We chose to randomize at the level of hive wall rather than hive, as was done in the Hodges study, which would better control for unknown factors existing at the colony level.  Beehive management may require immediate mite treatment, requeening, interventions to reduce robbing, and other interventions during the study period, all which could impact the amount of propolis deposition within a hive.  Such interventions could confound the results if not accounted for by randomizing treatment at the hive level.  Our intervention is also built to be applied in the field during hive maintenance and not preparation prior to apiary visit.  Using study hives in three different U.S. geographies and different A. mellifera genetic profiles could mean our results are more generalizable to the beekeeping community at large.

Our pilot study was only in the field for four weeks, a period unlikely long enough to assess the true effect of our treatments on propolis deposition.  Reviewing our protocol with Dr. Spivak, an expert in propolis research, she acknowledged that propolis deposition would need a minimum of 2 months to elicit a decent result, although a longer period would yield even better results (personal communication). Our results suggest that simple inner wall treatments can increase propolis deposition.  Our study confirmed the findings by Hodges et al. (2018) that the PT and the RW treatment both encourage the propolis envelope.  The use of the screen wall, an artificial “roughening” of the inner wall, performed less well over the four-week study period but may yet prove effective if studied over a full year.  Wood roughening did encourage propolis deposition and was simple, inexpensive and fast to apply in the field, with no impact on the bee space or the potential for bee trapping in gaps found in the screen and propolis trap method.  We recommend beekeepers interested in encouraging propolis deposition on the inner walls of managed hives to consider simple roughening using a hand drill and wire brush.  We will follow our hives over the next year to see if this wall roughening indeed leads to the creation of a propolis envelope in our hives. 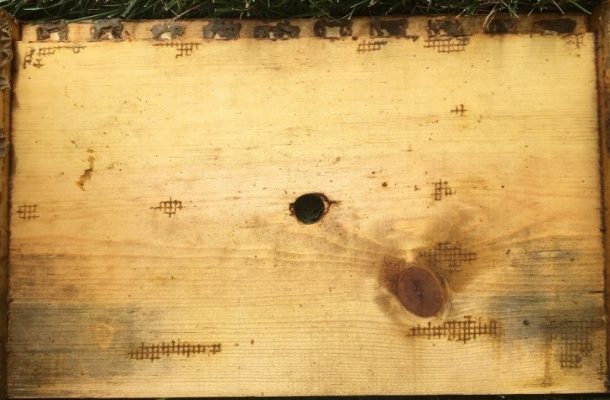 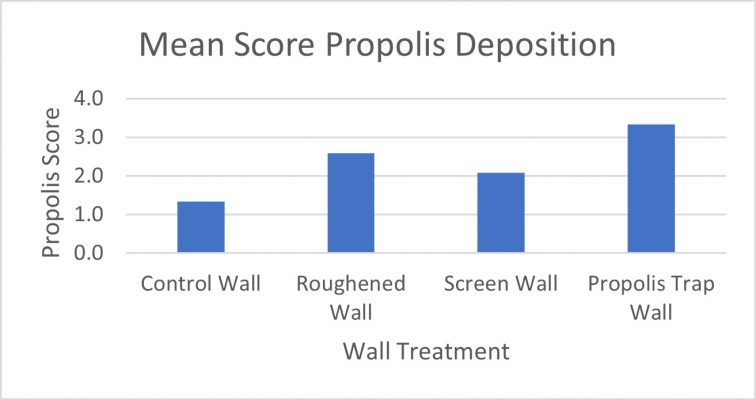 The Average Joe Beekeeper is a University of Montana Certified Master Beekeeper and provides insights on “Bee-havior” based on his experience maintaining Colonies and Hives for both Happy Busy Bees and various Beekeeping Clients.

You can read his Beekeeping Tips & Hints under the “Tips/Hints” heading on this site.